What does the ERA/IRN RentalTracker survey for the second quarter of 2021 tell us about the rental industry recovery from the Covid-19 pandemic?

The results of the second quarter ERA/IRN RentalTracker make for happy reading, with an overwhelmingly positive response from the more than 155 companies who took part in the survey over the final two weeks of June.

The positive balance of opinion on ‘business conditions now’ – the difference between the proportions reporting ‘improving’ and ‘deteriorating’ conditions – was +57%, which is second only to the first quarter of 2017 in the 11 years of RentalTracker surveys.

The decline in confidence in the first quarter of 2020 – at the onset of the pandemic – was rapid, worse even than the financial crisis years. But the recovery has been just as quick. As with the general economy, the rental business has been fast to rebound from the worst of the health crisis.

The same is true for trends in utilisation, with the positive balance of opinion reaching +64%, the highest ever in the survey (next highest is +57%, reported at the end of 2016). Only 6% of respondents were reporting falling utilisation during the second quarter of the year, with a remarkable 70% reported increasing rates of equipment use.

There is also optimism for the year ahead, with 74% forecasting an improved business environment a year from now and less than 5% expecting things to be worse. That positive balance of opinion is +69%, another record in the history of the survey.

The context for these results, of course, is the pandemic and the wide expectation that – while not out of the woods yet – we are on an improving path, with vaccination programmes advancing and a more normal life returning. 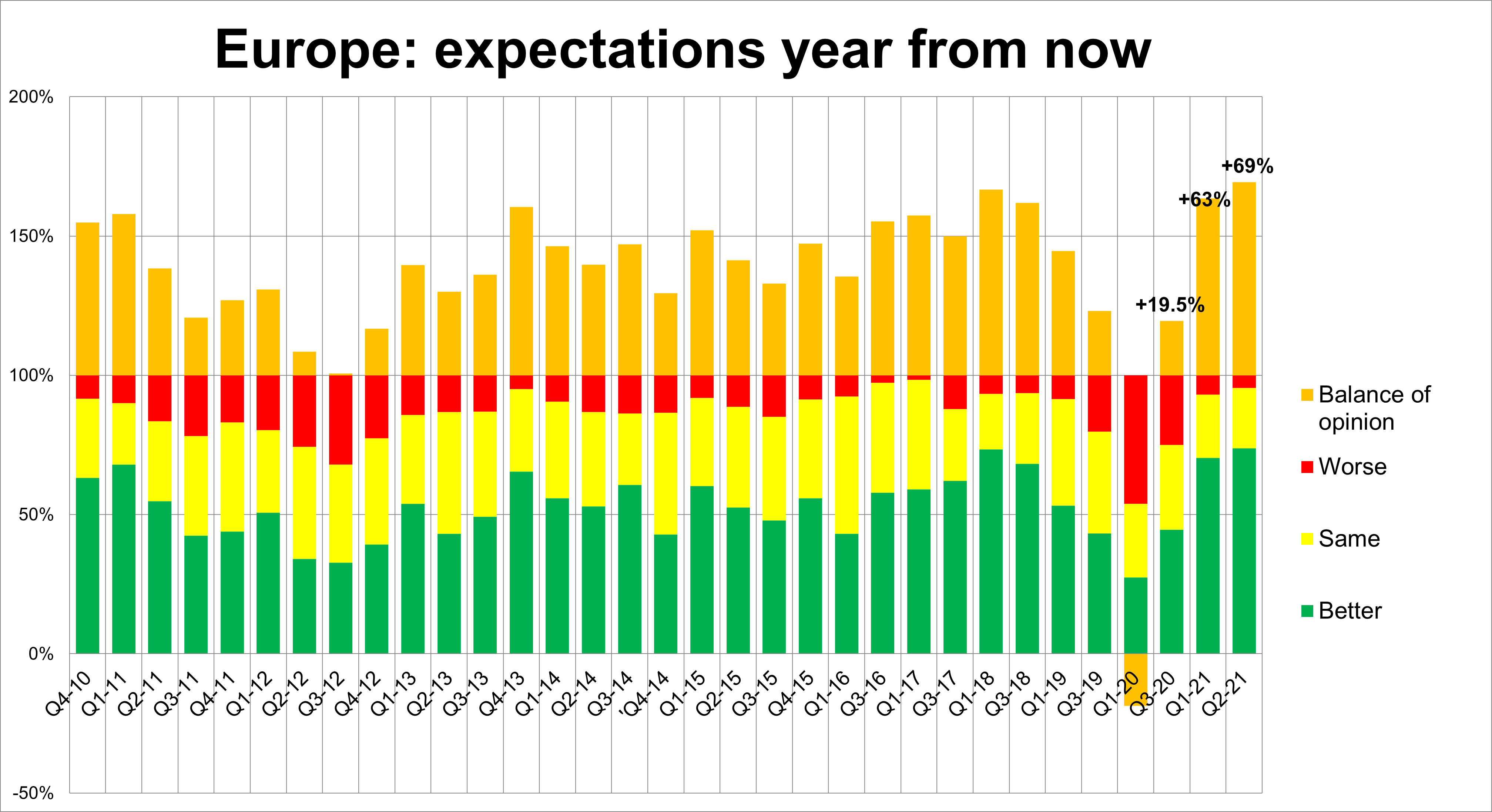 That is reflected too in the results on employment intentions. Almost 53% expect to add staff in the third quarter of 2021, which is not a record but close to it (only exceeded by two quarters at the end of 2017 and start of 2018). Just 3% of companies expect to have fewer employees in the next quarter.

There is a similarly positive picture with fleet investment, although again the comparison point is an exceptional previous year in which conservation of cash was a priority. Even so, the finding that 64% of companies will increase their investment this year is a positive one. The equivalent figure at the end of the first quarter was 40%, so even over that three-month period there has been a significant improvement in levels of optimism.

The proportion expecting to spend more again in 2022, compared to this year, is even higher at 68%, which is also enormously positive. It points to a positive year or two for equipment OEMs.

We know that there were enormous differences in how different countries dealt with the pandemic, and that was reflected in severe challenges for the rental industry in some countries – notably the UK, France, Spain and Italy – and far fewer problems in markets like the Netherlands, Germany and the Nordic countries (Sweden, Norway, Finland and Denmark).

The comparisons between the second quarter this year and the same period in 2020 reflect these differences: the worse things were in 2020, the better they are, or seem, now. 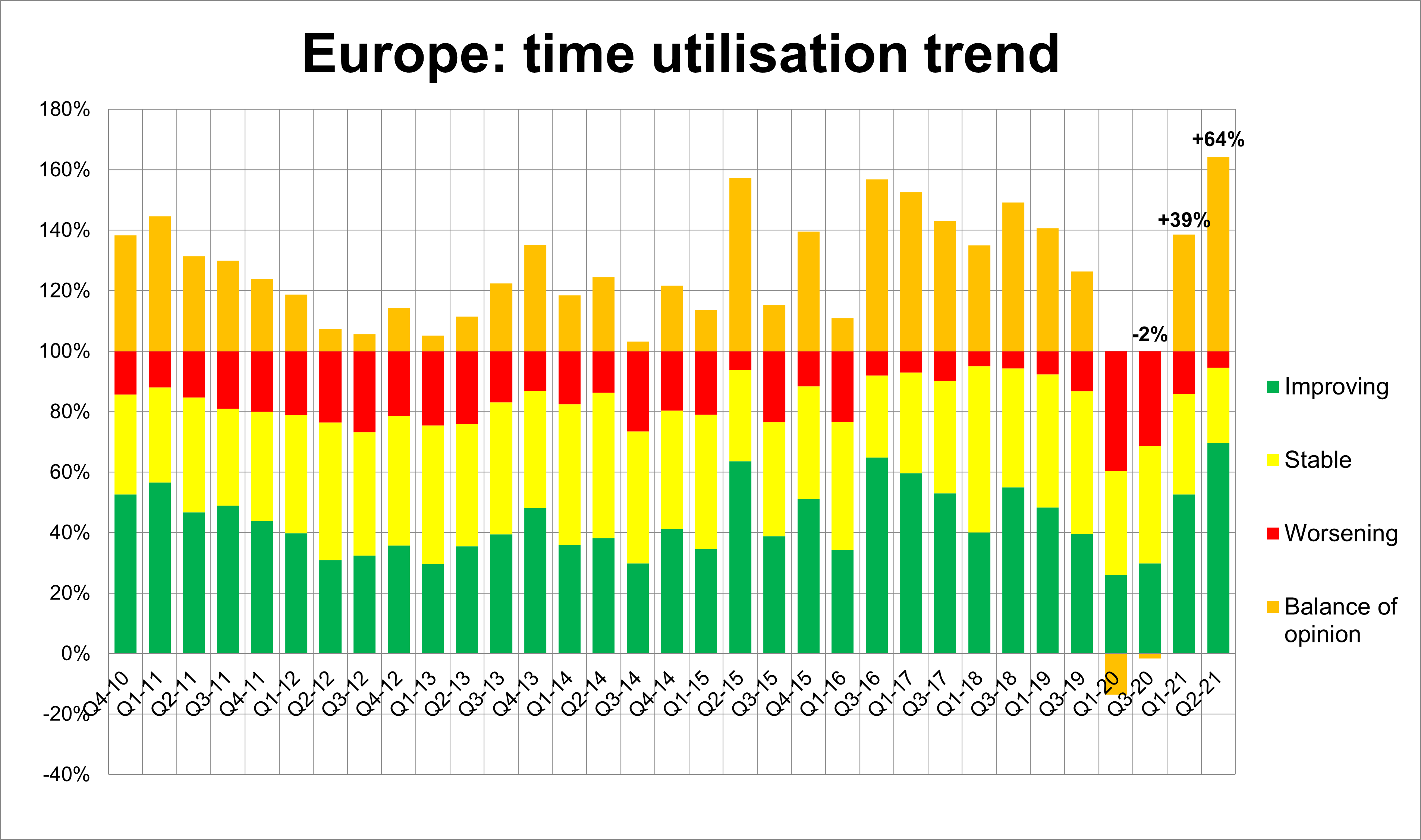 That means we might expect, generally, for respondents in the UK, Spain, France and Italy to report more positively, and that is indeed what we find. Companies in Italy, Spain and France are the most likely to add new staff in the third quarter of 2021; those in Spain and Italy are most likely to be seeing improving utilisation; and the UK, Italy and Spain were the top three in reporting both improving business conditions and year-on-year Q2 growth.

Likewise, countries where the impact was lower last year are seeing less of a rebound: Nordic companies are below the average in terms of Q2 trends, but that reflects a healthier environment a year ago, so should not be read in a negative light.

Overall, the results make for comforting reading for an industry still in recovery mode. Investment levels are up, more people are being employed, and there is optimism for further improvements in the coming year. We can only hope that the recovery gathers pace. The next RentalTracker survey at the end of the fourth quarter will tell us.

Read the full report, with further graphical analysis and data, in the July-August issue of International Rental News. www.internationalrentalnews.com